The Math behind Sudoku Ripeto

Mathematically, solving a Sudoku Ripeto or Custom Sudoku puzzle, just like any other Latin puzzle, can be seen as a problem of hypergraph coloring. As with classical Sudoku, finding puzzles and solutions can be performed with techniques like constraint programming or dancing links.
Of interest are questions of existence, enumeration and minimality. For example: what is the minimum number of clues that a Sudoku Ripeto puzzle played with numbers 111222333 may have? The answer for classical Sudoku is 17.
Many interesting decision questions about Sudoku Ripeto may well be NP-complete. In this case there could be no worst-case polynomial time algorithm able to answer them. One of these questions is: given a partially filled board, does it have a solution? For partially filled Latin squares the problem is known to be NP-complete indeed.
at September 03, 2014 No comments:

The ideas regarding boards, regions, and symbols mentioned in the post Latin Puzzles are condensed in the Latin Puzzle definition:

1. A board has:
2. A Latin puzzle (lower-case p) has:
3. A Latin Puzzle (upper-case p) is the set of puzzles that results when we render variable the multiset of symbols and the set of clues in a given puzzle. A Latin Puzzle may have an inscription: a set of pairs (symbol, cell) present in all its derived puzzles

4. The Latin Puzzle (upper-case p) is the set of puzzles that results when we render variable the board, the multiset of symbols and the clues in a given puzzle

With this definition, the Latin square Puzzle, Sudoku Ripeto –which includes classical Sudoku– and Custom Sudoku are all Latin Puzzles.
at September 02, 2014 No comments:

Custom Star is a Latin Puzzle played on fourteen lines as regions. 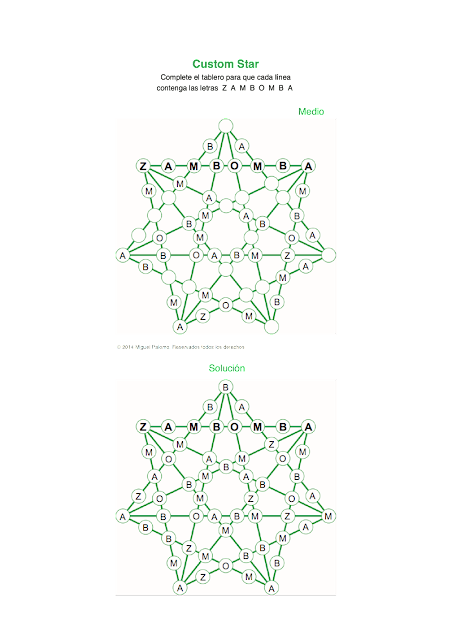 Both Sudoku Ripeto and Custom Sudoku are examples of Latin Puzzles. Latin Puzzles generalize both classical Sudoku and the Latin square Puzzle (see below) with different board shapes, repeated numbers and repeated letters.

A Latin square of order n is an arrangement of n x n cells in which every row and every column holds numbers 1 to n –other symbols may be used provided they are all different. Latin squares are well known objects and the base of Sudoku. They are so named because 18th century Swiss mathematician Leonhard Euler used Latin letters as symbols in his paper De Quadratis Magicis. Latin squares have a long and rich history. They are mentioned in relation to magic squares as early as the 17th century, although they seem to have been used much earlier in amulets.
We can remove symbols from a Latin square to obtain a partial square that is completable to just the original one. The challenge to complete this partial square is an instance of the Latin Square Puzzle. There are many other puzzles with additional arithmetic or geometric constraints whose solutions are also Latin squares. French newspapers featured puzzles very similar to Sudoku in the 19th century.

Sudoku is played on a square board holding 81 cells and 27 regions (9 rows, 9 columns and 9 3x3 subsquares) with 9 cells each. A set of 9 different symbols (usually numbers 1 to 9) must be placed on every region. A completed Sudoku is clearly a Latin square.
Sudoku first became popular in Japan, after the company Nikoli started publishing it in the eighties. It spread later to the rest of the world after The Times of London featured it in 2004. It was later discovered by Will Shortz –the crossword puzzle editor for The New York Times– that the Puzzle's author was actually American architect Howard Garns, whose puzzles first appeared in the Dell Pencil Puzzles and Word Games magazine in 1979 with the name Number Place.

Latin Puzzles not based on Latin squares

After creating puzzles Moshaiku (2010) and Konseku (2011) Spanish engineer and songwriter Miguel Palomo investigated the possibility of using triangular and hexagonal boards for puzzles similar to Sudoku. This first such puzzles were Canario (2012) –inspired by the Pintaderas found in the Spanish Canary Islands–, Monthai (2013) –inspired by the namesake Thai pillow– and Douze France (2013). The puzzles had split regions, a characteristic shared by Tartan (2013) on a square board. Helios (2013) on the other hand had a star-shaped board. The main characteristic shared by these puzzles was that their solutions were not Latin squares.
In his articles Latin Polytopes (2014) and Latin Puzzles (2016), Palomo formalized some ideas on board shape, and proposed a generalization for both Latin squares and the Latin square Puzzle. These articles contained new puzzles with tetrahedral, cubic, octahedral, dodecahedral and icosahedral boards among others, that were later presented in lectures about Latin polytopes and the evolution of Sudoku.

Later experiments in 2014 produced puzzles with symbols repeated, like Sudoku Ripeto (played with numbers) and Custom Sudoku (with letters that may form words in the board). They marked yet another departure from Sudoku.

Region size and number of symbols

Up to this point, regions in Latin puzzles were all the same size, matching the number of symbols used. A later generalization of the concept:
This led to a rather general definition of Latin Puzzles.

Custom Sudoku: Countries & Territories (Volume 1) contains 252 puzzles in assorted difficulties, each featuring the name of a country or...